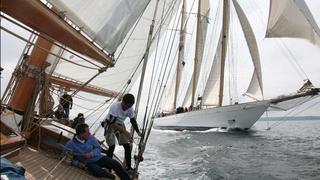 In yesterday’s third race of the Pendennis Cup, 26m Velacarina went one better than she did on Wednesday (when she shared first place with 46m Christopher) by winning the Pendennis Division outright on corrected time.

Race Officer Peter Craig postponed the staggered starts for just over half a hour, allowing an Easterly sea breeze to fill in which, accompanied by glorious sunshine, provided much better sailing conditions than the forecast had suggested. Christopher and 21.3m Breakaway didn’t overtake Velacarina until what turned out to be the penultimate leg: the course was shortened close to Falmouth Beach in a breeze which was beginning to die. Breakaway won line honours again, with Christopher second and Velacarina third, but then there was the usual wait for the corrected time results.

‘It was a very close call’, says Velacarina’s captain, Steven Plews, ‘we weren’t sure if we were going to get the win or not but in the end we did.’ However, the margin of victory over Christopher, less than half a minute, was still very close. Breakaway was third, and for the third time the three schooners – 42m Mariette, 25m Kelpie of Falmouth and 64.85m Adix – took the remaining places in that order.

Going into today’s last race, overall victory could go to Velacarina, Breakaway or Christopher, but it is in Velacarina’s hands as she just needs a top two place to seal it. Her owner is Pendennis Shipyard chairman Terence Mordaunt who was unable to attend the regatta himself. ‘It’s a great shame that he’s not here,’ says Plews, ‘I know that he would have thoroughly enjoyed this week but I have spoken to him and he is delighted that we are doing well.’

The four boats in the Little Dennis Division sailed a completely different course to the other class. ‘I was approached by a couple of the owners who said that they would prefer to see a little more windward-leeward activity so that is exactly what we gave them,’ says Craig. Firebrand (13.1m) won again and is now just a single point ahead of second-placed 13.1m Cerinthe. Either boat could take the series, however – if Cerinthe were to win today’s last race she would have an identical score to Firebrand but would take the series on the ‘last race’ count-back rule.