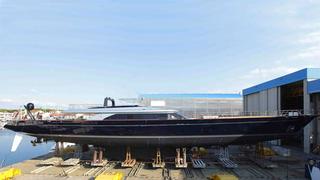 Italian superyacht builder Perini Navi has announced the launch of Perseus3, the second yacht in its new generation 60m series, at their Viareggio shipyard.

Designed by Perini Navi naval architects in collaboration with New Zealander Ron Holland, Perseus3 has a Perini Navi sail control system and a lifting keel, whose draft varies from 4.30 to 12.30m. Her 75m high mast and 23m long boom are in carbon fibre, as is her standing rigging. She is also the first Perini Navi yacht to have a carbon fibre bowsprit, a request from the the owner that will allow for fast sail changes and a larger head sail plan.

This sloop has an innovative deck layout with six winches for fast tacking and easy handling of halyards and lines. The jib is new generation controlled by new generation captive winches that can reel in 35t at over 110m per minute. The impressive sail set includes: two Gennakers, one Code 0, one Reacher, one Blade, one Spinnaker Stay Sail, one working Jib and an imposing Main Sail, for a combined area of 10,000 square meters.

Hull and superstructure in aluminium were constructed at the Perini Navi-Yildiz shipyard in Turkey and make for a GT of less than 500 tons and an optimised displacement of circa 570 tons.

The interiors were designed in-house by Perini architects and can accommodate 12 guests in five cabins, one of which has sliding beds. The owner’s suite is full beam and can be divided by a removable wall. A third yacht in this 60m series is scheduled to be delivered in 2016.