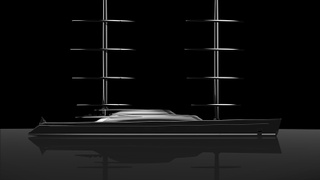 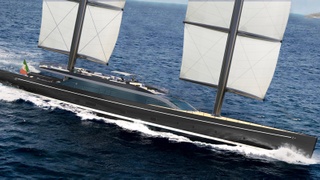 Perini Navi has revealed a new range of Falcon Rig sailing yachts at the Monaco Yacht Show; and announced it has received a letter of intent for the first hull.

The range pairs the aerodynamic efficiency of the Falcon Rig sail plan with new generation winches for simpler operation and easy handling.

Key features include new superstructures that retain the “unmistakable Perini Navi aesthetic”, spacious aft areas, a large open beach club and a cockpit and saloon arranged on one level.

The 92 metre model, for which Perini Navi has received the letter of intent, will feature carbon fibre masts, a 2,400 square metre sail plan and an upper deck dedicated to the master suite. There is also an extensive use of glass on board, specifically in the main staircase that links all four decks. This results in bright interiors.

Speaking at the Monaco Yacht Show, Lamberto Tacoli, chairman and chief executive of Perini Navi, said: “Created in-house in Perini Navi and inspired by the iconic Maltese Falcon, it is a complete product range that hails a new opportunity for the sailing superyacht world, thanks to its cutting-edge new generation technologies, contemporary styling cues and unprecedented volumes”

It also revealed a new a 74 metre motor yacht named Vanguard designed by Horacio Bozzo and the Perini Navi/ Ora Ito capsule collection developed in partnership with the French designer. The collection reinterprets the 56 metre flagship of the yard’s fleet with two new designs.