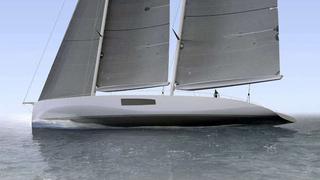 The concept for the 44m Persak & Wurmfeld-designed schooner was introduced last year, but the expansion of the series with a new 36m yacht and the design team's and Derecktor's shared mission to bring superyacht building back to the northeast US is all new. Persak & Wurmfeld (P&W) has also refreshed the design of the 44m performance schooner sailing yacht and showed the new model off at the Fort Lauderdale boat show.

The updated design reinforces the strong structural forms of the original 44m yacht – including the interesting profile that resembles a single wave with a handrail that is aligned with the changing flow of the deck – with the advent of a new transom. The previous square transom has been replaced with an aft-sloping deck that continues the wave form to the water line.

'Carl and I pride ourselves in creating bold, sculptural forms, which are artwork unto themselves that only look better when floating,' says Jeremy Wurmfeld of Persak & Wurmfeld. 'We grew up in New York and around the art scene and are inspired by modern art and shapes.'

The schooner series is also inspired by Bucket-racing sailing yachts, the 44m is designed to be a true ocean-going performance yacht while the new 36m schooner is envisioned as the ultimate bucket racer. 'The 36m inspiration was the introductory bucket racer – smaller, less volume, but all the same performance benefits, with the lifting keel as well,' says.

Working with Derecktor, the intention is to showcase the yacht builder's talents and capabilities at its Mamaroneck, New York, facility. 'Aluminium construction is our strong point,' says James Brewer, in charge of business development at Derecktor. 'One of reasons these are aluminium boats with a composite deck is we have done dual-material construction before – have done powerboats with aluminium and composite superstructure – so we have more than enough expertise.'

He also notes that the organic forms, such as that of the deck design of the P&W schooner series, are also well-suited to composite builds, and that noise and vibration better with composite than aluminium-deck racing yachts.

Derecktor and P&W forged their relationship during the build of 85.6m superyacht Cakewalk, when P&W was brought on in late 2010 to serve as project engineer for the closing years of the significant project.

'We share the common desire to bring the building of large sailboats back to America,' Brewer says. 'Many bucket-racing yacht owners are American, but sailboats are built in other parts of world; we want to bring owners American-built bucket sailboats.

The primary naval architecture of the P&W's schooner series is complete, and Derecktor predicts an 18-month to two-year build time for the yacht.