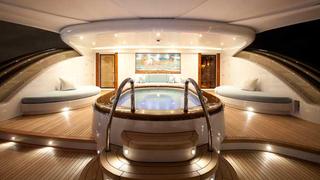 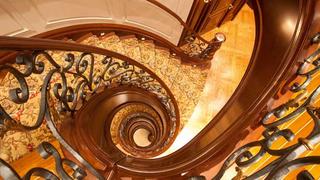 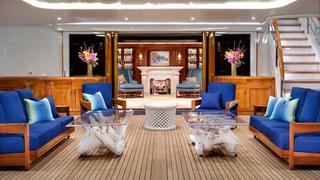 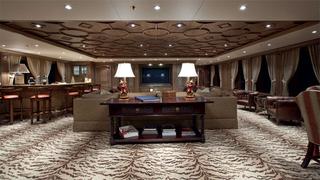 At 85.6 metres and 2,998 tonnes, no one would argue that Cakewalk is not something of consequence. She is the largest yacht by volume to come out of the United States and the only US-built yacht that exceeds her length on deck is Corsair IV, launched in 1931.

In 2002, the owner and his family were aboard ‘old Cakewalk’ – a 62.2 metre yacht built by Feadship – when Carinthia VII pulled into the yacht club at Antibes. The design of that 97metre yacht stopped the owner and captain Bill Zinser in mid-sentence and the image of that moment directed the course of events since.

Even before he saw Carinthia VII, Cakewalk’s owner had already decided that he needed a bigger boat in order to carry larger tenders. Discussions for a new boat began two years later, and by autumn 2005, Zinser had a fairly complete specification. The owner wanted to build the boat in the United States, partly so that it would be possible for him and his wife to visit the project frequently during construction.

The key design element, and the second biggest change from the previous Feadship, would be the profile – and the first call was to Tim Heywood, the designer behind Carinthia VII, with a request to design a new Cakewalk ‘from the rubber gaskets out’. For naval architecture, Hugo van Wieringen, who had been the lead designer on both the previous Cakewalks, signed on to the new project under the mantle of his current company, Azure Naval Architects. The team was joined by Florida-based interior designer Liz Dalton, and momentum grew for US construction.

‘Our decision to build this ambitious project in the US was based on our knowledge of the incredible skill sets available to us in the New York and Connecticut market. Our quality standards are the highest in the industry, and Derecktor assured us they would achieve them,’ notes the owner. Derecktor has 60 years of yacht-building experience and substantial commercial ship experience as well.

When Cakewalkgently floated out of her dry dock on 8 August 2010, ‘achievement’ was an understatement.

While long ends, strong horizontal lines and a sweeping sheer define the profile, the interior brief had several details: a central staircase, an elevator and all guest suites on the main deck. Dalton refined Heywood’s general arrangement around a family and charter-friendly interior and used 3D geometry to create the staircase.

With all six guest suites and a supernumerary cabin on the main deck, the starboard foyer also serves as the entrance to the guest area, where all cabins are equal in size and appointments and open off a centreline corridor 18 metres long. Dalton explored a classic theme in the guest suites, each of which has a different colour scheme.

Wanting to balance the sheer scale and drama Cakewalk’s six cascading decks present from the stern, the aft deck is purposely kept small. Glass doors open not to a cavernous saloon but to a cosy library with a fireplace, intimate seating and a Steinway grand piano. Also carved out of the nearly 170 square metre saloon is the private dining room, which is uniquely designed as a rotunda on centreline.

Between the main and bridge decks is the owners’ deck: a private, seven-room suite. A gymnasium is to port, opposite a yoga studio that doubles as a beauty salon and massage room. Forward of the two bathrooms and dressing rooms is a full-beam sitting room and study while all the way forward, facing windows that sweep 180 degrees, is the owners’ bedroom, its signature element a canopied king-size bed.

At the opposite end of this deck is the primary outdoor dining area, which easily sits 16 at one large table but also has three small tables with combinations of fixed and loose seating. The service bar for this area is within the owners’ saloon, which is also the yacht’s cinema. As with each of the four decks devoted to owner and guest use, this one is served by a pantry of proportions and equipage that would make celebrity chefs jealous.

Most of the bridge deck belongs to operations. Although the bridge is enormous and features three seating areas, auxiliary spaces are really the stars. The captain’s office is arranged with three workstations for visiting service technicians. The crew office is separate from the radio room, both of which are independent from the navigation area where two computing systems run simultaneously for redundancy.

As to the space that drove the entire project, the ‘boathouse’ is aft of the crew area and systems control room on the lower deck. A pair of overhead cranes handle movement of a 11.3 metre Vikal limousine tender also designed by Heywood (and winner of the 2010 ShowBoats Design Award for limousine tenders), a 10 metre Riva Cento and a 10.7 metre Intrepid sportfish. With the extras such as toy stowage and dive gear in other areas, this bright, white climate-controlled area is totally dedicated to tenders and their maintenance.

Read the full feature on Cakewalk in Boat International 295 (January 2011).