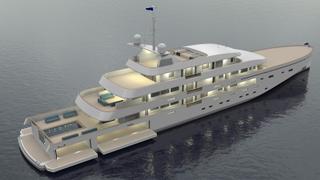 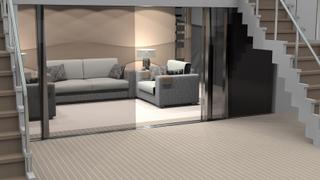 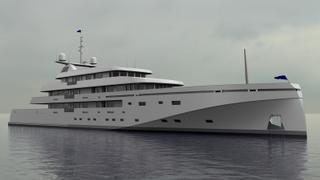 The five-decked yacht was originally developed for an owner with specific requirements for high security and privacy. The owner’s suite has consequently been kept separate from the crew and guest accommodation. It sits on the bridge deck and features a master suite entrance lobby and sun deck lobby. It also has access via a stairway to a private roof deck, master saloon and open area on the sun deck.

Two VIP guest suites sit on the next deck down; the helideck, which also features a VIP saloon and helicopter landing pad. Down again, on the main deck, sit six more guest suites, a main deck saloon and dining area. Outside there is an al fresco dining area, infinity pool and sunlounging spaces on the stern.

All crew and operational areas meanwhile have been contained on the lower deck. This consists of nine twin crew cabins forward, the galley, pantry and engine room.

One of the design's standout features are folding hull doors which join to create a walk-around beach deck platform. The mid-engine room is also equipped with enough space to house twin tenders port and starboard, while the beach club sits aft.

Total accommodation is for 24 crew and between 12 and 18 guests. Bolke estimates that Europa’s cruising speed will sit between 15 and 17 knots.

The platform is also capable of client customisation. Bolke said, “Although the design and current layout was initiated by an interested party, the thought has been to maximise the versatility of the 80 metre platform design to allow modification to suit specific client needs.”