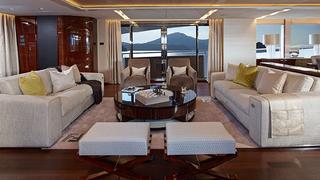 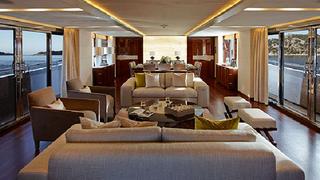 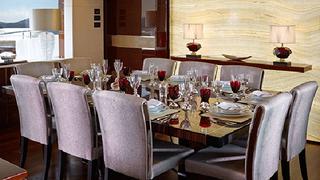 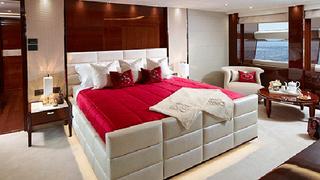 The interior of newly launched Princess 40M X5 has been revealed by her British-based builders.

Princess has established a reputation for producing popular semi-custom yachts before breaking into the custom market with its M Class range. The first in its custom M Class series was Imperial Princess, which was launched in 2012 to widespread critical acclaim. She was given the silver Neptune award in the Three Deck Semi-Displacement or Planing Motor Yachts category at the 2013 World Superyacht Awards.

The latest model features bespoke interior styling in collaboration with Fendi Casa, the Princess Design Studio and her owner. She has a five-cabin arrangement and has been designed with the idea of creating a feeling of “timeless luxury”.

The theme is created with the use of gloss cherry wood combined with classic cream leathers, fabrics and furniture is accented with bright velvets and satins.

In the main deck saloon all of the furniture, seating, lighting, fabrics and accessories are finished with the Fendi marque. The dining area has a macassar ebony table, which is lit by back-lit Onyx panel to the bulkhead, and can accommodate 10 guests.

The main deck master suite has a private dressing area, with his and her walk-in wardrobes, and has been accessorised with red.

The lower deck has four en-suite guest cabins all featuring Fendi fabrics, furniture and accessories with different colour schemes. The aft VIP cabin has vibrant yellow velvets and gold silks. To port and starboard double en suite cabins are finished in blues and greens with a rich red Fendi bed cover, cushions and dressing chair to the forward VIP.

Marble has been used to individualise each bathroom. The master en suite uses the rare nero portoro marble in the shower to contrast with neutral marble for the bath and flooring.

The upper deck has a skylounge with large windows allowing natural light to flood into the space. There is an L shaped seating area, which has additional Fendi Casa chairs and a television.

As well as 10 guests The Princess 40M X5 also has room for seven crew across three cabins.