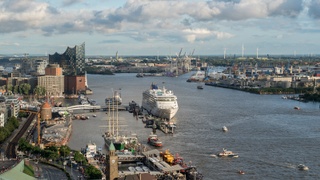 The Port of Amsterdam and HISWA Holland Yachting Group have joined forces to create a northern itinerary for visiting superyachts.

The pair are working with a number of northern ports to create what they have dubbed the “Northern European Superyacht Route,” which they hope will attract more large yachts to the city.

First to sign on the dotted line is Germany’s port of Hamburg, Europe's third largest port.

Sacha Rougier, managing director of cruise gate Hamburg, explained: “The Northern European Route has so many exciting places and diverse attractions and we believe that Hamburg – as Germany´s most exciting waterfront city – is the ideal port of call for superyachts.”

Three potential docking sites for yachts to 90 metres have already been identified with more to come in coming months, she added.

“We are currently in talks with local authorities in Norway and the various fjord regions to explore ways of including them in this new Northern European Route,” he said.

Despite plans for the route only being in progress for a few years, the city is already benefiting with an increase of visiting superyachts. Dockage is available around the city, including in front of the National Maritime Museum in the heart of the city.

"Fifteen owners and captains have already visited Amsterdam over the past year,” revealed Alma Prins, commercial manager superyachts for the Port of Amsterdam.