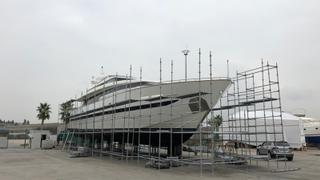 The 32 metre Sanlorenzo superyacht Polar Star has arrived at the KRM shipyard for an extensive six-month refit.

The yacht, which was launched in 2001, will undergo an extensive list of works which includes converting the dining area into an additional fifth cabin.

When complete, Polar Star's accommodation capacity will increase from eight guests to 10.

The superstructure windows will be enlarged while the flybridge deck will be completely redesigned to include a sunbed and wetbar.

General maintenance will take place on the teak decks and cabin’s bathrooms. The transom will be redesigned while the gensets and propulsion system will be completely renewed.

Lastly, the hull and superstructure will be completely repainted.

Delivered in 2001, Polar Star will have a top speed of 30 knots and maximum cruising range of 500 nautical miles at 25 knots. She can accommodate a total of eight guests with four crew members. Her interior design was created by Lisa Vanderpump.