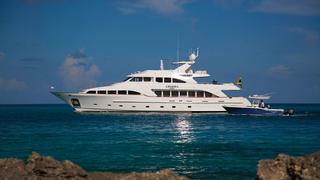 The 35 metre Benetti superyacht Camarina Royale has sunk 70 miles off the coast of Cuba following a devastating fire. The six crew managed to escape from the burning yacht with no reported injuries, and they are now safely ashore in Florida.

The Captain of Camarina Royale contacted The Triton to describe how events had unfolded on Sunday (January 31).

“The yacht was underway returning to Fort Lauderdale after the winter season in the Virgin Islands with a crew of six onboard” captain Jason Halvorsen said.

“The fire originated in the engine room as a result of an undetermined mechanical failure,” added the captain. He went on to say that the crew attempted to fight the fire using all available means, “but eventually the ship was overcome by flames and was lost”.

The crew of Camarina Royale called for assistance and a nearby ship, the LPG tanker Clipper Venus, came to their aid and rescued them from the burning yacht.

“We thank the captain and crew of the Clipper Venus, which responded to the call for assistance and remained in the area until the United States Coast Guard arrived,” added Halvorsen. “We also thank the officers and crew of the USCG cutter ­Confidence for their quick response and assistance as well as the transport of the crew to a nearby port.”

Camarina Royale, which was launched by Benetti in 2001, is not the first yacht to catch fire in 2016. The One and Barbie were seriously damaged by a fire at the beginning of January and a few weeks later a Princess 95 caught fire in Turkey.

The One and Barbie damaged by huge fire in Turkey