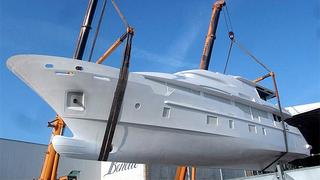 The first hull of the new Benetti Tradition series, the Supreme 108, was recently transferred to her fitting out shed. She will succeed the successful Tradition 105 series.

The Tradition Supreme 108, currently known under the hull number BK001, is designed by Stefano Righini. This new series has a length of 32.98m and she is built in composite with a carbon hardtop.

Little is known at the moment about the interior, except that her designer is François Zuretti and two layout options are available with four or five cabins. Special features also include side balconies, a full-beam skylounge and an extra large sundeck, details rarely seen on a yacht of this size.

Powered by twin MAN engines, she's anticipated to reach a top speed of 13.5 knots and a cruising speed of 12.5 knots.

The first Tradition Supreme 108 is scheduled for delivery in October 2013.