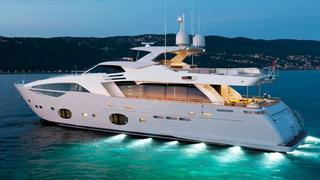 Scheduled to make her debut during the next Festival de la Plaisance at Cannes in September, the first hull of the brand new Custom Line 100 series was recently presented to the press. As a preview, here are a few specs and pictures about her.

Although the Custom Line 100 is not the successor to the highly successful Custom Line 97 series (which will stay in production for more traditional clients), she is based on the same raised pilothouse concept. With a more modern and sporty exterior design developed by Advanced Yacht Technology and Zuccon International Project, this all-composite motor yacht is also slightly longer than her predecessor with an LOA of 30.60m.

Zuccon International Project is also responsible of the interior. Details à la mode are present like a side opening on the main deck extending the salon on a balcony, or large openings bringing a lot of natural light inside. The general arrangement accommodates 10 guests in a full-beam master suite on the main deck, and four double cabins on the lower deck.

The first Custom Line 100 is now delivered, and further sisters are already in production.