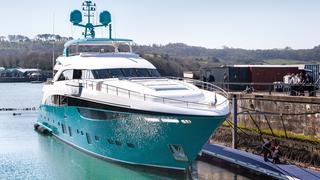 Princess Yachts will cut up to 350 jobs as part of a large-scale restructuring and investment programme. Despite strong order books, the Plymouth based semi-custom yacht builder has planned the changes in a bid to improve productivity and secure the future of the business.

A statement from Princess said the UK yard has “successfully weathered what proved to be a gruelling year for Britain’s yacht-building industry.”

Just last month Fairline Boats entered into administration and was marketed for sale. Sunseeker also had to cut several hundred jobs over the last few years, although it is now looking to hire 100 workers to support new models.

Princess was able to maintain high staff levels during the financial crisis as it expanded its infrastructure and developed new models. With the new range being launched this year, the workforce can now be reduced from its current 2,000 staff without loss of capacity. The job losses are expected to affect back office, development and production divisions.

Chris Gates, Managing Director of Princess Yachts, said the “announcement of job losses, although not undertaken lightly, is designed to maintain the business in the best possible shape for the next phase of its evolution”.

The investment programme will aim to further develop the Princess range, which already features six new models across the M Class, S Class, V Class and Flybridge yacht ranges. The recently launched Princess 30M is to be revealed at the Dusseldorf Boat Show at the end of January.

Despite news of job cuts among British yacht builders, the 2016 Global Order Book suggests that the market is the strongest it has been for several years. In fact more super yachts are being built around the world now than at any time since the global financial crisis.