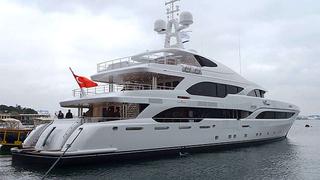 Spotted this spring by our editors visiting Turkey for our World Superyacht Awards in Istanbul, the latest Proteksan-Turquoise was discreetly launched in April and christened Ileria.

Previously known under the project named Thunder (hull NB56), Ileria was ordered in 2010. This 49.9m superyacht is built in steel and aluminium and designed by the yard's in-house team.

The modern interior, by Jean-Guy Vergès, accommodates 14 guests in seven cabins: the master suite and a VIP are on the main deck, a double is on the bridge deck and two doubles plus two twins are on the lower deck.

Powered by twin 820kW Caterpillar engines, Ileria achieves a top speed of 14.5 knots and a range of 4,500 nautical miles at 12 knots.

Ileria is now delivered to her experienced owners.