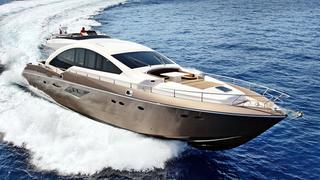 We reported most of the new launches in 2011, but even with our sharp eyes some remained under the radar. It is time to put that to rights in the case of the new flagship of Queens Yachts, the Queens 86 Fly Sport.

This 26 metre composite motor yacht was built by Flag Marine, the partner shipyard of Queens Yachts, located in Rosignano Marittimo, a few kilometres south of Livorno. Designed by Architects Vienna & Locarno of the TDF Studio in Milan, she was launched in July 2011, and made her debut at the Festival de la Plaisance of Cannes in September. Following the style of the previous models between 15 and 21 metres, the Queens 86 offers the same sporty line, but she's the first to offer a flybridge with a wheel station.

The yacht has large interior volumes, which are flooded with natural light thanks to large windows and portholes. Modern in style, the interior design is refined with decorative elements by MissoniHome. Eight guests can be accommodated in the layout which includes a full-beam master suite, a double cabin and two twin cabins, both of which can be converted into doubles.

The option of quadruple 700hp Volvo Penta 900 IPS engines - a first in Europe - gives a top speed of 32 knots and a cruising speed of 25 knots, while also reducing fuel consumption and offering better manoeuvrability.

With the first hull now sold, Queens Yachts has confirmed that a second Queens 86 is under construction and scheduled to launch in 2013.