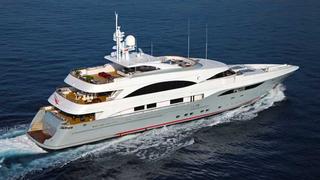 Prima, a Columbus 177 motor yacht built by Palumbo Shipyard, received her Green Star Plus notation from RINA during the recent Monaco Yacht Show. The award was presented by HSH Prince Albert II of Monaco accompanied by His Majesty the King of Spain.

The Green Star Plus is an additional, voluntary notation based on an environmental performance index which measures all aspects of the vessel's impact on the environment, including carbon emissions.

Prima was launched earlier this summer, and is currently listed for sale with Fraser Yachts.

The yacht Prima represents Palumbo Shipyard's commitment to building superyachts that are as environmentally friendly as technology will allow. This will be put into practice with the new commission Palumbo has just received to build a Columbus 125 Hybrid, which with its electric hybrid propulsion system will have low emissions and highly efficient fuel consumption over a 5,000 nautical mile cruising range.