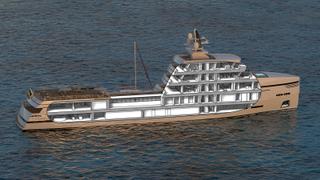 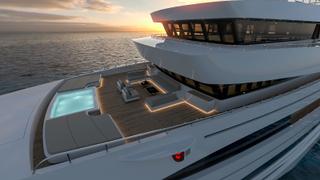 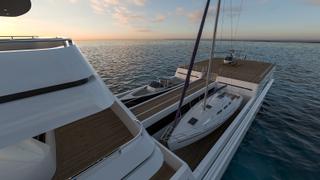 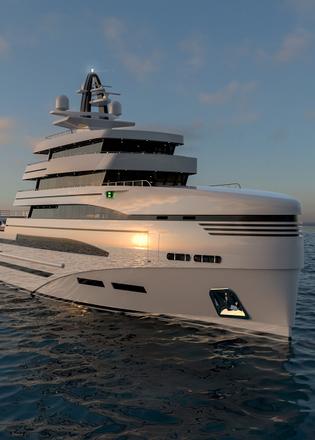 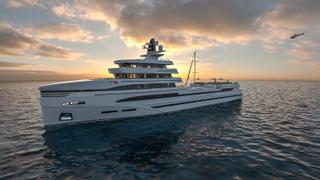 The cross-section image below reveals Spadolini's plans for the layout, which include a two-tier owner's suite and a superyacht beach club that is hidden beneath the aft helipad.

“The biggest challenge was to create something different from the look-alike expedition vessels already available,” Spadolini said. “I studied the market very carefully and came up with a masculine, no-frills exterior design, but it’s the general arrangement that really sets this project apart.”

Key features include a plentiful amidships storage area, which can hold a large tender, a sailing yacht and many more superyacht water toys besides. Spadolini adds that the helideck has been situated as far from the accommodation as possible to minimise take-off noise, but can be moved further forward if required.

“Despite the large deck areas dedicated to storage for tender and toys, I was able to develop a vessel with a volume of over 2,000GT split between the forward superstructure and aft guest area below the helipad,” he continued. “Connected by an open and covered walkway, this is a unique arrangement on a yacht borrowed from certain working vessels.”

Take a closer look at the 85 metre Rosetti Superyachts concept

As well as the duplex owner's suite, the design allows for further guest cabins on the main deck, with all the crew quarters situated on the lower deck. A central superyacht elevator would connect all four levels.

“As we weren’t constrained by the limitations of a traditional yacht or by the requests of a specific owner, I was able to come up with layout solutions that break the mould,” Spadolini added. “Able to voyage anywhere and buildable at relatively low cost, it’s the most authentic yacht I’ve designed in my 40-year career.”

Power would come from a quadruple MTU 16V4000 M43S engine set-up for a top speed of 20 knots and a globetrotting range of 5,500 nautical miles at a cruising speed of 15 knots.

Based on the Adriatic coast in Ravenna’s San Vitale shipyard, Rosetti Marino Group has access to a 160 metre dry dock and 4,000 square metres of mechanical workshops, including several assembly halls with overhead cranes capable of lifting more than 90 tonnes. Other designs on the drawing board include a 48 metre version of the Rosetti support vessel, which was released back in March.