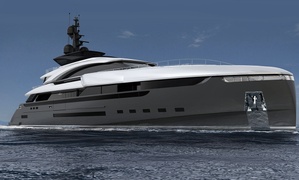 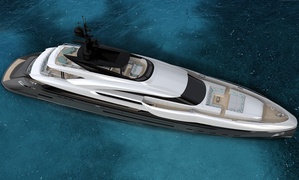 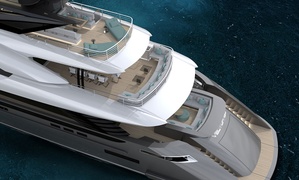 The Italian yard revealed the yacht will be launched at the Viareggio based shipyard alongside the 50 metre in-build superyacht LeL and Florentia 52.

Sold in March 2018 to an American owner, Project Vector 50 features exterior design penned by Enrico Gobbi's Team For Design. The yard described the the yacht as featuring "neat lines" with "stylish details" that strike a balance between elegance and attitude. Details include air vent grills reminiscent of a "sport coupé car.

"The design of this large and unique sporting yacht boasts a well-proportioned and slender silhouette with long continuous glass surfaces," the yard added.

Accommodation on board is for 12 guests across six cabins comprising a forward-facing master suite on the main deck, with an intimate private terrace on the starboard side. The three spacious double ensuite VIP cabins meanwhile sit on the lower deck alongside a twin cabin. The crew quarters meanwhile allows for a staff of nine.

Power will come from a pair of MTU 16V 2000 M96L engines for a top speed of 19 knots and cruising speed of 15 knots with a range of 3,560 nautical miles. The yacht will also have a sub 500GT. Naval architecture has been panned by Arrabito Naval Architects.

The yacht’s propulsion system wilhas not yet been disclosed, but the yard states that she will have a cruising speed of 15 knots, topping out at 19 knots.