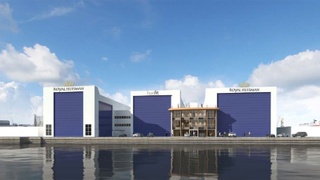 Dutch yard Royal Huisman is set to expand after announcing it will take over the Holland Jachtbouw facility in Amsterdam.

The facility, which entered the ownership of the Port of Amsterdam on May 14, will now be leased to Royal Huisman, which will dedicate the yard to its future new-build and refit projects.

The move means Royal Huisman will become the second superyacht builder to join the Port of Amsterdam alongside Feadship Royal van Lent.

“This second second shipyard will, over a longer period of time, serve as an excellent addition to our existing site in Vollenhove, both for new builds and for refits,” he said.

Port of Amsterdam chief executive Koen Overtoom added that the arrival of Royal Huisman takes the Port “one step closer further fulfilling our goal of becoming a superyacht hub.”

“The Amsterdam area is highly sought-after by yacht manufacturers owing to its highly skilled workforce, international airport and the celebrated Dutch sense of enterprise,” he said.