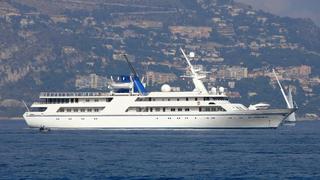 Saddam Hussein’s 82 metre superyacht Basrah Breeze is now being used by Iraqi marine researchers from the University of Basrah’s Marine Science Center. The scientists are using the yacht to explore the changing Persian Gulf.

Built in 1981 by Danish shipyard Helsingor Vaerft for then president of Iraq Saddam Hussein, the luxury yacht was originally called the Qadissiyat Saddam. It cost $25 million to build but the yachts current captain, Hussein Ghazi Khalifa, said it would now it would cost four times that.

The Basrah Breeze is not the first luxury yacht to be used for a different purpose and there is an increasing demand for expedition yachts among superyacht owners. With ocean conservation becoming more of a talking point, Fleet Miami have even offered the chance for guests to take part in a scientific learning experience while on charter.

The Basrah Breeze arrived in Basra in 2010 under government ownership but she has seen little use until recently. In 2014 professors at the university convinced the government to allow them to use the yacht as part of their research fleet.

Several missions have now taken place to study water quality and sea life around the newly forming coral reef off the Iraqi coast. They have made some important discoveries but future missions will depend on whether they can find the funds to fuel the yacht.

Captain Khalifa said “we want to sail in 2016, but the financial crisis prevents us.” Cooperation with other countries such as Iran and Kuwait could be the answer to paying the fuel bill.

During her build the Basrah Breeze was fitted out with all of the usual superyacht amenities; including marble-tiled bathrooms, numerous guest cabins and a large presidential suite. The superyacht’s indulgent interior has now been modified to accommodate Iraqi scientists but much of the original décor still remains.

Saddam Hussein was never able to enjoy the yacht because of the war with Iran and she was left moored in Oman for years. In the mid 1980's Hussein gave her as a gift to King Fahd bin Abdulaziz of Saudi Arabia. The yacht then changed hands several more times before ending up under the ownership of a Cayman Islands company.

Following the execution of Saddam Hussein the Cayman Islands company tried to sell the yacht in 2007 but documents were discovered that legally confirmed it to still be an Iraqi vessel. Following a difficult legal battle the Iraqi government was able to claim ownership.

Take part in a scientific learning expedition on board superyacht Usher