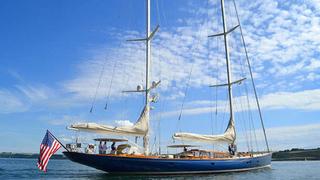 The German Frers designed 42m ketch Rebecca, launched by Pendennis in 1999, is back in the yard for an extensive refit.

Rebecca will be in the yard until April 2014 for her 15-year ABS survey alongside substantial engineering and technical works including an upgrade to the hydraulics, electric, alarm and monitoring systems; the installation of new generators; a full overhaul of her original main engine; and the addition of a sewage treatment plant on board.

Layout modifications to the library area will be carried out to add more books along with a general upgrade and overhaul of her interiors. Her exterior will be substantially improved with a new teak deck. This in itself is quite a task as her original deck was constructed from specially scarfed 60 to 80ft lengths of teak rather than shorter lengths. The worklist will be completed with an overhaul of all her deck hardware complemented by a full repaint.

Although Rebecca has previously revisited Pendennis twice, this will be the most significant refit carried out in Falmouth, UK, since her launch.