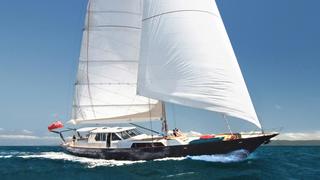 The 29 metre sailing yacht Asia has sunk 55 miles off the coast of an Indonesian island after hitting an object in the water.

An international search operation was sparked after the Australian maritime authority picked up the initial distress call. Believing Asia to be UK registered, Australian authorities alerted the HM Coastguard at 9.08pm GMT on November 22.

While the coastguard could not find the yacht on the UK register, it did find that a US registered EPIRB had been activated in the same area as the initial distress call.

After “extensive investigation work”, the coastguard was able to ascertain that the yacht was in fact Malaysia registered and eventually made contact with the skipper.

The skipper consequently “confirmed that the vessel had sunk off Indonesia after hitting an object in the water,” the coastguard said in a statement.

All four crew on board escaped in the yacht’s RIB and were met by marine police when they reached land on the island of Bima. “The crew are safe and well and receiving assistance,” the coastguard added.

Asia is currently listed for sale with Fraser. Built in steel and aluminium, Asia was delivered in 2009 and has had a successful charter career in South East Asia.