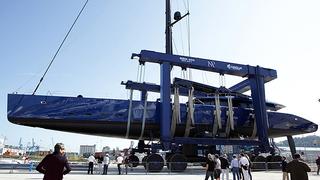 With a light displacement of only 250 tons, Better Place has set a new benchmark for a flybridge sailing yacht of this size in terms of both performance and comfort, thus meeting her owners requirements. Her unusual design - from the boards of Tripp Design - will make her recognisable all over the world.

'We succeeded in delivering an environmentally friendly and breakthrough Wally 50m with the aggressive and sleek lines of a true performance sailing yacht, rather than the motor sailer look typical of this class of yachts,' said Luca Bassani Antivari, founder of Wally and head of research and development.

Indeed Better Place promises high performance with a 67.5m carbon mast, the tallest yet built by Hall Spars, and her Wally lifting keel, which extends the draught from 4.6m to 6.5m. Even in light airs under 10 knots performance will be good.

Better Place is also the first sailing yacht developed to meet the environmental requirements of RINA's Green Star class. Equipped with a Siemens diesel electric propulsion system, she has three Caterpillar generators producing 705kW of power, which will enable a top speed of 14 knots. She also has LED lights fitted throughout.

The modern interior, designed by Wetzels Brown Partners, stays true to Wally's inside-outside living concept with interior areas flowing seamlessly into exterior areas. An open plan deckhouse has saloon and dining areas in addition to the wheelhouse, while up to 12 guests are accommodated in five cabins below. Placed aft, the owner's suite is very light thanks to large portholes on either side and a large opening onto a private 'terrace on the sea'. The four double guest cabins, and crew quarters for 10 are forward.

Amongst the yacht's special features we note a fully equipped flybridge, a spa pool, two tenders stowed on the foredeck and a side bathing platform...

Better Place will be delivered before the end of June 2012.