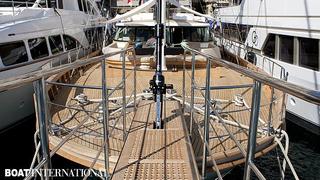 Sailing yacht Renaissance set to be delivered by CNT - Castagnola

Previously announced by us under the name Loop I, this sailing yacht made her debut at the Monaco Yacht Show under her definitive name Renaissance. Here are some of the first pictures of her interior.

Renaissance is a 39 metre classic schooner recently launched by Costruzioni Navali Tigullio - Castagnola based in Lavagna. This yard is one of the last ones in Italy to continue to build yachts in wood.

Renaissance's hull, and the one of her sistership under construction, were built in Turkey under Italian supervision and then moved to Italy for completion and outfitting at CNT - Castagnola. These two classic schooners have been designed by a team of renowned Italian naval architects and designers, including Silverio Della Rosa for the naval architecture and sail plan, Studio Faggioni for the structural plan, Venelli & Kramer for the deck and exterior design, and Nauta Yachts for the interior design.

During our visit at the Monaco Yacht Show, we were impressed by the interior volume of Renaissance. The deck saloon is larger than her competitors, and large windows bring in a lot of light. The decoration is modern, and this area has an atypical access to the foredeck where another exterior lounge welcomes guests.

Renaissance accommodates 10 guests in a full-beam master, two double and two twin cabins. The crew quarters for four are located aft, with a large galley. Two extra crew cabins are available in the bow with access from the deck.

Renaissance and her sistership are for sale by Fraser Yachts and Equinox Yachts, asking 8.5M€. *Renaissance * will be ready to be delivered before the end of the year, while her sistership will be finished with her future owner having a choice for some possible modifications.

CNT - Castagnola also confirmed the current construction of a 37 metre motor yacht due to be launched next year.