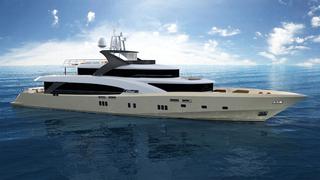 Sale of the 2nd 50-metre superyacht for Chantier Naval Couach

Chantier Naval Couach has announced the sale of their second 50-metre superyacht to a Russian client, just a few months after the sale of the first hull in March 2010.

The Couach 5000 Fly is the yard's flagship, and her length of 49.9m makes her the largest composite yacht ever built in France. Designed by Exequiel Cano-Lanza and the in-house team at Couach, she has 3 decks and 500m² of living space, accommodating 12 guests in a master, a VIP, two double and two twin cabins. She's powered by two 5300hp MTU engines giving her a maximum speed of 28 knots.

The first hull will be delivered during Summer 2011, and the second will touch the water in 2012.

This new order shows the revival of Chantier Naval Couach (formerly Couach Yachts) since the sale of the company in June 2009. The French shipyard has now 6 projects under construction and an order book with a value of €80 million.