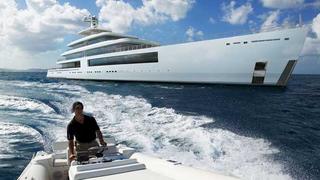 Sander Sinot designs 110m superyacht for a balanced on board lifestyle

Sinot Yacht Design unveiled its 110m concept Equilibrium at the Monaco Yacht Show, a project designed for a balanced and harmonious life on board.

Sinot says that the design can be considered the ‘evolutionary successor’ to the work the studio did on the 87.78m motor yacht Musashi, for which Sinot Yacht Design won prizes at the 2012 Showboats Design Awards and World Superyacht Awards.

‘With Equilibrium, we challenged ourselves to take a more radical direction without losing the eye for feasibility,’ says Sinot. This resulted in a dialogue between Sander Sinot, Henk de Vries, CEO of the Feadship De Vries Group Superyacht Builders , various customers and others in the yachting industry, who discussed the demands a yacht should meet, for both the present and the future.

Sinot says Equilibrium reflects the ‘balance between man, machine and nature’: this is represented by the flow between indoor and outdoor spaces accentuated by basalt decking that continues inside, views to appreciate the natural surroundings, and

a customisable layout that offers both social spaces and privacy.

To retain an ‘outdoor feeling’ in interior spaces the studio has given the yacht frameless floor-to-ceiling windows with glass that appears to touch each surface directly. These are accentuated by architectural forms in the interior of the yacht and by outer staircases placed on the side, rather than the aft decks. ‘We wanted to have those there because we don’t like aft staircases that block the view,’ says Sinot.

The human element of the ‘balance’ ethos is apparent in the use of organic materials with soft and ‘friendly’ surfaces, as well as in the many custom built details of the yacht, the proposed furniture and art on board.

Striking outdoor features include a large infinity pool with an incorporated bar, and the forward deck with an integrated seating area tucked away under a panel that can be pneumatically lifted.

Sinot has created a layout with six main-deck guest rooms, two VIP guest rooms and an owner’s suite aft on the upper deck, although the studio is open to further discussions on the layout to reflect the personal desires of the owner.