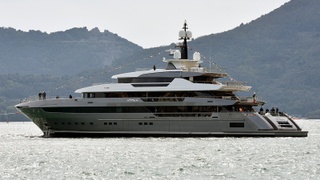 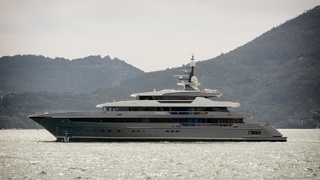 Italian builder Sanlorenzo has launched its largest yacht to date, the 64 metre Attila, which has become the flagship of the yard.

Sold in July 2016, the Sanlorenzo 64 Steel features a steel hull and aluminium superstructure and was built at the yard’s La Spezia facility.

Exterior lines come from Officina Italiana Design with key features including a 78 square metre beach club on the lower deck and stern-centric main deck. The yard was keen to highlight a double stairway which connects the pool and dining area with the beach club. The beach club is equipped with a sauna, hammam, massage room and gym.

Sanlorenzo's Antonio Santella said: "The idea between the layout in fact enables us to integrate the main aft deck and beach club as much as possible. This characteristic thus enables us to enjoy both areas, around which the social life on board if focused without separating the guests.”

He also drew attention to the "enormous barbecue" in the dining area of the main deck, which was especially designed for the Argentinian owner. Meanwhile the large foredeck features a touch-and-go helideck.

The 1,600GT interior was furnished and decorated by Francesco Paszkowski and Margherita Casprini in a "modern South American style". It includes a private owner's deck, four guest rooms and a full beam VIP suite on the main deck. The interior also includes a climate controlled wine cellar, which can store up to 500 bottles.