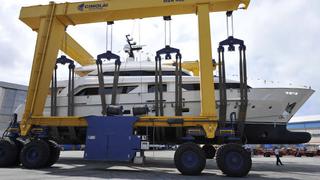 The two Sanlorenzo SL96s are India and Peacemaker. India was specially designed for her Italian owner who choose a refined decòr combining two precious woods: a light-grey bleached oak for floorings and walls, and the Canaletto walnut for the furniture. Peacemaker is characterized by a four cabin interior layout, instead of the traditional five cabins, in order to house a gym on the lower deck. Her American owner is fond of technology, so Sanlorenzo installed a domotics system on board that enables the management of all the electronic appliances via smartphone, iPad and similar devices.

The SD92 is Noor, 27.6 metre length, is the twenty-first hull of the popular SD92 line. Her Italian owner chose a totally white interior design, very modern and minimal, with extensive use of white lacquered finishing for furniture and ceilings, alternated with white leather. The owner’s cabin is located on the main deck, while the lower deck houses three guest cabins and a fitness area.

Finally, the SD112 Aventus is the second hull of the new SD112 line launched just few months after the debut of the first hull O. At 112ft (33.65m), she is a semi-displacement hull in fibreglass with four decks. Her Belgian owner opted for a five cabin layout, with a large owner’s suite on the main deck and two fold-down terraces in the salon. The main wood chosen for the interior design is the fine lined American elm, both for the walls and for the furniture. The decor is completed with elements by Cassina, Gallotti & Radice and Minotti for the interior and Summit, Maxalto and Lenti for the exterior.