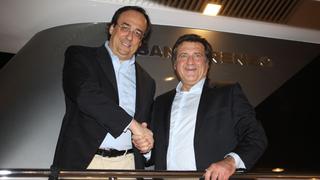 Former Ferretti boss Fulvio Dodich has been appointed as the new CEO of Italian builder Sanlorenzo.

‘Sanlorenzo…definitely is one of the three leading shipyards in the yachting industry, but I am sure it has a lot of unexpressed potential,’ Dodich comments.

‘I am thinking of an aggressive approach: the creation of new models and the simultaneous strengthening and enlargement of the dealer network will bring Sanlorenzo to a successful new market penetration – especially in emerging markets in Asia, Far east, China and Latin America.’

In 2006 he also became managing director of Ferretti Spa, the group’s holding company, leaving in 2007 to become an acquisitions consultant. Since the Italian Investment Fund took a minority share in Sanlorenzo in 2011, the yard’s goal has been expansion through the acquisition of other shipyards – and Dodich’s appointment reflects this aim.