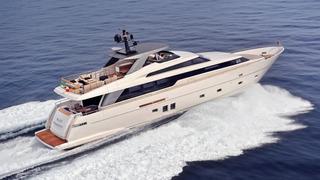 The international governing body for motorboat sport has honoured Italian boatbuilder Sanlorenzo for the environmental credentials of its SL94.

The Union Internationale Motonautique (UIM) launched the Environmental Award to inspire and recognise excellence in innovation, development and application of environmentally-friendly technologies.

The UIM felt that the 28.6m SL94, launched in August 2011, best exemplified the increasing environmental awareness of the yachting industry. In particular the judges pointed to the electronic probes used to monitor and prevent oil spillage and the electric actuators used to avoid hydraulic oil leakage from the steering systems.

On board sewage treatment is carried out by an IMO approved plant, while fuel usage and tank levels for the main engines and the gensets are continually monitored from the wheelhouse. Other important key points are the climatisation plant optimisation and the low energy lighting system.

The fibreglass structure of the Sanlorenzo SL94 was also produced using a low-emissions manufacturing process: the deckhouse and deck are made using vacuum-infusion resin, and the entire hull is built with the vacuum-infusion process – using vacuum bags for PVC bonding.

Massimo Perotti, Chairman Sanlorenzo Spa notes that the SL94 is, ‘Rich of innovations, especially regarding the environmentally aware systems, which even which even exceed the requirements of RINA’s Green Star.’