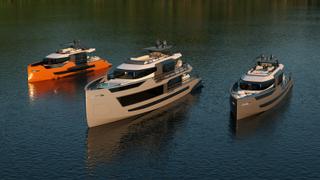 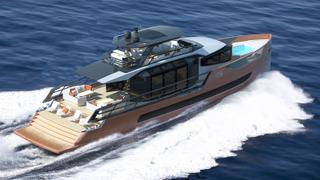 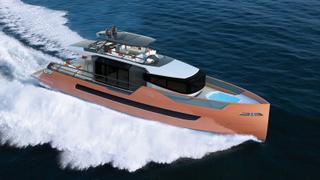 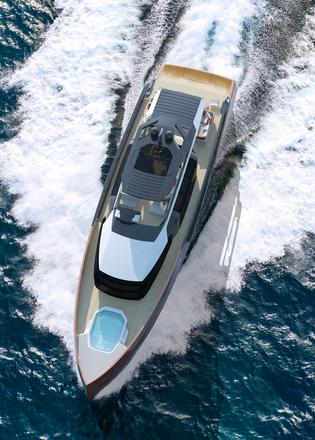 Turkish yard Sarp Yachts announced last week (September 29) at the Monaco Yacht Show that it will build a new range of hybrid yachts called XSR. Styled inside and out by Red Yacht Design, the XSR range will ride on a fast displacement hull developed by Van Oossanen Naval Architects.

The first model in the range, the 25.7 metre XSR 85 will be built on speculation to CE classification and launched in early 2019. Emre Sandan, shipyard manager at Sarp Yachts, told Boat International: “We are planning to build these yachts as a series, starting with the XSR 85, because I believe that this is a yacht for the future and for everybody.”

Further designs are in the pipeline, including the 32 metre XSR 105 and the 38 metre XSR 125, with scale models of all three attracting considerable client interest at last month’s show.

Unifying features include a distinctive superyacht wheelhouse windscreen that stands proud of the superstructure, as well as extensive use of glazing throughout and all-GRP construction.

Focussing on the XSR 85, its 125GT interior includes accommodation for eight guests and four crewmembers all on the lower deck. Meanwhile, the saloon has been envisaged as a highly flexible area, with freestanding furniture and sliding doors, so it can easily combine with the aft deck to create one large entertainment space.

Take a closer look at the Sarp Yachts XSR 85

Key features include a notably large superyacht spa pool on the foredeck and a choice of tender storage options — either via a side-loading garage, or hidden under the transom steps. Power will come from a twin 1,000hp diesel-electric propulsion system, which will allow for a top speed of 20 knots, while the 7,500 litre fuel capacity should allow for extended coastal cruises.

Other superyacht projects currently under development at the Turkish yard include the 55.3 metre Nacre 55, which is also due to hit the water in 2019.