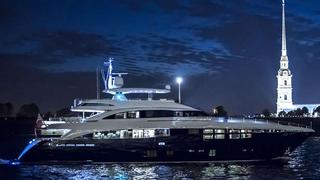 Hull No 2 in the builder's 40M superyacht series was commissioned for private owner. The new 40M yacht features an elegant, Asian-influenced interior by yacht designer Mark Berryman, featuring a refined colour palette and a mix of textures from bamboo and rattan to golden oak wood. Princess Yachts' 40M hull No 2 accommodats 12 owners and guests in six spacious cabins including a main deck master stateroom suite. There are also accommodations for seven crew members.

The new 40M tri-deck motor yacht has some differences from her predecessor. The interior has been remodelled to remove non structural columns, opening up the main saloon and creating a large area for a ding room. Also notable is the custom sunpad on the aft sun deck and the Corinthian blue paint job on the hull, both specified by the owner. Flying Fish also hosts a Williams 625 diesel jet tender and she has an upgraded Crestron audio-visual system.

Powered by twin MTU M93L engines, she promises high performance and long-range capabilities. She has also been fitted with an advance heating system for comfortably cruising in colder climates.

Princess Yachts has announced an order for a new Princess 35M in August, joining the M Class fleet between the 40M and the 32M.