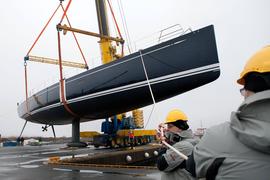 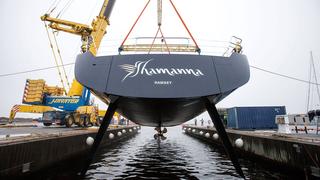 Finnish sailing superyacht builder Nautor’s Swan has launched the second hull of its flagship 115 series, which is now named Shamanna.

The launch of Shamanna, at Nautor's Swan's facilities in Pietarsaari, Finland, comes after her sale in January 2014.

The 35.20 metre Swan 115FD is a flush deck model with sporty lines and configured for high performance. Built in GRP with a teak deck, her naval architecture and exterior design is by German Frers.

She's the second in the series of Swan 115 sailing superyachts, which are constructed from a female mould and built completely in-house at Nautor's. The features of the series are a wide stern, twin rudders and a high grade steel keel blade with a T-bulb.

Options also abound for the interior arrangements with the series, offering the owner's cabin aft or forward along with three of four guest staterooms and an option for a separate dining area from saloon. Shamanna accommodates eight guests in one master suite, two double suites and a twin room.

Speaking of the sale back in 2014, CEO Enrico Chieffi said: "We are thrilled to announce the sale of Swan 115FD - 002 (Shamanna). With close to half a century of heritage behind us, the Swan 115 is a thoroughbred that stands true to the original values that inspired our very first yacht, the Swan 36 - passion, tradition and innovation."