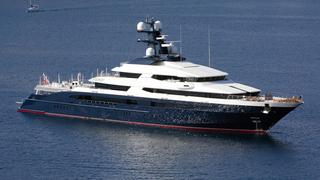 Marine Traffic confirms by the yacht's AIS that the 91.5 metre Oceanco superyacht lies in Singapore under the altered name.

It comes after Genting Malaysia Bhd made the $126m (£95.9m) successful bid for the yacht. The Admiralty Court in Kuala Lumpur previously stipulated this was to be paid by the end of April and the sale is now believed to have been finalised.

The long running saga dates back to August last year when the superyacht was transferred to Malaysia after being seized by Indonesian authorities at the request of the US Department of Justice.

It is alleged that the yacht was originally purchased by previous owner Low Taek Jho using money embezzled from the 1MDB state fund. Created in 2009, the fund was originally intended to aid economic development in the country.

“This will rank as the highest recovery to date for the Government of Malaysia from the 1MDB scandal; within a mere eight months from the commencement of this action,” said Attorney General of Malaysia Tommy Thomas when the sale was first announced.

“This $126 million is the best offer received over the five months, from October 2018, when Equanimity was first put up for sale. Many offers were received in this period, and a few were over $100 million.”

Burgess, together with lawyers representing the Malaysian government, had previously placed the Oceanco-built yacht on a "fast-track" to sell before March 31. However, this deadline had elapsed and Genting Malaysia's bid was negotiated directly with the Malaysia government.

During the yacht's seizure, it was reported that the Malaysian government’s yacht maintenance spend reached RM14.2 million (£2.7 million).

“The Navy was magnanimous in affording prime space in Langkawi for the docking of the Equanimity over five months, free of any charges,” Thomas confirmed. “The Navy, together with the Malaysian Police, ensured the security and safety of the Vessel whilst under arrest, even carefully escorting her during sea trials by prospective buyers.”

Launched in the Netherlands in 2014, Tranquility was the first superyacht to be built to the new PYC standard. As a result, she can accommodate up to 26 guests, as well as 28 crew members. Her twin 4,828hp MTU 20V4000 M73 diesel engines propel her to a top speed of 19.5 knots. When trimmed back to her cruising speed of 16 knots, Tranquility boasts a globetrotting range, thanks to her total fuel capacity of 271,000 litres.