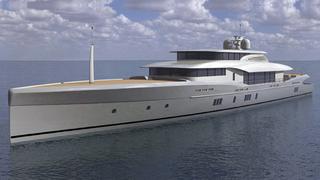 Sencora Yachts has unveiled a new 52m motor yacht concept, featuring a composite hull that harnesses the speed capability of a sailing boat.

‘The idea was to make a mix between a sailing boat hull and a modern yacht superstructure, to have the best of both worlds – the speed and the luxury,’ says Luc Scherrer, marketing manager of Sencora Yachts.

The superyacht’s light, slender ‘high speed displacement’ hull, designed for Sencora by Bill Dixon at Dixon Yacht Design, greatly reduces resistance. Along with propulsion by two azimuth thrusters, this is intended to make her faster than a typical 52m displacement yacht, allowing her to either attain a higher speed for the same fuel consumption, or the same speed for less fuel consumption.

‘It’s a full-composite boat, built with epoxy and a PVC core reinforced by carbon so it’s very light, coming in at 245 tonnes. You need only 2,000hp to reach a top speed of 16 knots,’ says Scherrer.

The technical specifications of the Sencora 52 may have been designed for speed, but her superstructure is that of a luxury yacht. Focus Yacht Design, responsible for the interior, has created a minimalist environment with the use of light coloured woods and fabrics, although final decisions are at the discretion of clients.

Accommodation includes two twin cabins, a large VIP cabin – which can be divided to create two identical rooms, each with an en suite – and an owners’ cabin on the aft deck, with sliding doors on to the aft terrace. In total, the yacht can accommodate an owner/guest party of 10, along with eight crew. Twin Caterpillar C32 diesel engines provide a cruising speed of 12 knots for a range of 5,000 nautical miles.