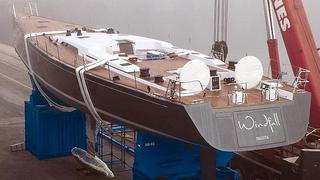 Nearly two years after the delivery of the first Southern Wind 94 called Kiboko (bis), the South African yard announces the launch of Windfall, the second hull of this 28.64 metre sailing yacht series.

Like her earlier sister, Windfall has naval architecture by Reichel Pugh and general styling by Nauta Design. She's built in advanced composite sandwich materials making her light and fast. With her 463sqm of sail area, the SW 94 becomes a perfect sailing yacht for both cruises and regattas.

In the standard version, the SW 94 accommodates six guests in three cabins: a master and two twins. The aft crew quarters are for four members.

Following her delivery before the end of the year, Windfall will leave South African waters to reach the Med where she will cruise during the next summer season.