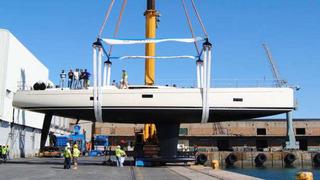 Southern Wind Shipyard has confirmed that hull No 2 of its new SW82 series sailing superyacht, Grande Orazio, was launched in Cape Town, South Africa, on 19 January, 2014, as scheduled.

The launch of the new 24.72m sailing yacht took place just six months after SW82 hull No 1 Feelin Good, the first in this series, splashed in July 2013. Farr Yacht Design has provided the naval architecture, sail plan and appendages design for the SW82 mini-series, while the general concept, deck layout and interior design is by Nauta Design, who has collaborated with Southern Wind Shipyards for a number of years.

The owner is an avid racer, and his brief for the SW82 Grande Orazio called for a yacht that delivered both high performance for racing and was also comfortable for cruising with the family. Nauta Design has designed Grande Orazio with the Flush Deck layout version in the SW82 series, which has a sleek and sporty coach roof and a racing-oriented rig. She features a High-Modulus Southern Spars carbon-fibre mast and boom, EC6 + carbon rigging, carbon foil furler, racing winches, removable bowsprit designed for racing and a deeper 4.2m keel (the standard being 4m), and she will displace 40.5 tons.

The brief also called for a highly-customised interior layout offering flexibility as the yacht transitions from being used for racing or cruising. The owner's cabin/studio is set forward, the main saloon is amidships, and crew accommodations and the galley are aft. Four additional staterooms can then be used by guests or crew members as dictated by the yacht's use.

Commissioning and sea trials will now commence, and Grand Orazio is planned to leave Cape Town by mid-March 2014, heading out on a 7,000-mile maiden voyage to her base in the Mediterranean Sea. The owner intends to compete for the 12th annual of the Southern Wind Trophy, held within the Loro Piana Superyacht Regatta taking place in Porto Cervo 3-7 June as well the Maxi Yacht Rolex Cup in September and the Rolex Middle Sea Race in October.