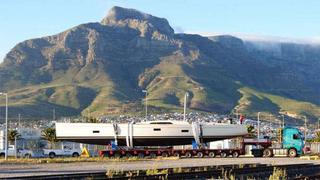 Southern Wind Shipyard has announced that it will launch Hull No 2 of its new SW82 series sailing yacht, called Grande Orazio, in January 2014.

This news comes on the heels of the delivery – just three months ago – of the first hull in Southern Wind's new SW82 series Feelin' Good. The owners chose the flush deck version of the layout, which features a sleek, low-profile coach roof. She features exterior and interior design by Nauta Yacht Design and naval architecture is by Farr Yacht Design.

As her owner is an avid racer, the brief for Grande Orazio has called for a strong focus on high performance. She will have a displacement of 40.5 tons and her deck plan and rig will be oriented for racing, including a high-modulus Southern Spars carbon mast and boom, EC6 + carbon rigging, carbon foil furler, racing winches, removable bowsprit designed for racing and a deeper 4.2m keel.

Her interior – boasting ample volumes thanks to her 5.91m beam – has also been highly customised to suit the owner's needs and be as flexible as possible for the many uses Grane Orazio is planned for, which will be either cruising with the family and a minimum crew or racing with a professional crew. During cruising mode, the owner can take advantage of the spacious aft owner's suite, which includes a private office. Accommodation is offered in four additional cabins, of which one or two can be devoted to crew members depending what is needed.

Southern Wind is busy working on the outfitting of Grande Orazio, which it plans to launch at the start of next year.