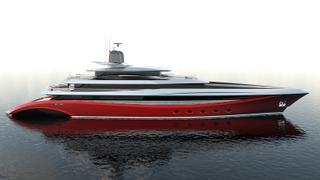 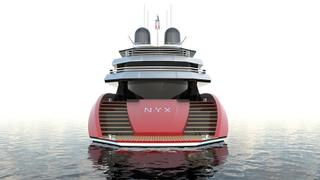 A fast displacement steel hull would support an aluminium superstructure, and the designers add that particular attention was paid to aesthetics and proportions.

Accommodation is for up to 14 guests, who will have plenty of room to mingle in NYX’s large open-plan saloon. Meanwhile, the crew quarters would allow for a staff of up to 20 people.

In a statement, the studio added: “Our goal was to design a challenging vessel with a strong character, for an active client with passion for style and a dynamic and charming lifestyle.”

The owner would be able to enjoy the privacy of a private deck, complete with its own fold-out superyacht terrace, Jacuzzi and bar.

Other key features include a spa area with an underwater viewing lounge, a second Jacuzzi on the foredeck, and another fold-out terrace in the VIP cabin. Preliminary interior renderings hint at an opulent décor, with chandeliers, mosaic tiling and curved staircases.

The superyacht garage has been designed with plenty of space for storing four tenders measuring up to 12 metres, four Jet Skis and a two-person submersible.

Power would come from a pair of 3,433hp MTU engines for a cruising speed of 16 knots and a top speed of 20 knots. Further details are yet to be disclosed, but the GA has been described as “unique”.

NYX follows on from the 45 metre superyacht concept Mania, which Squared MK released back in May.