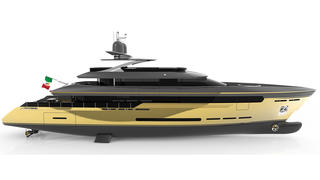 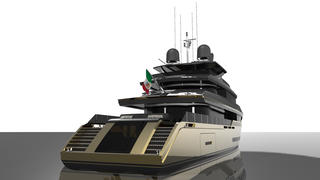 British design studio Squared MK has revealed its latest concept, a 45 metre superyacht called Mania. The guiding principle for this design was to combine elements from different time periods, including the exteriors of a GT sportscar and the interior of a mansion house.

Mania features a total interior volume of just under 500GT, allowing accommodation for 12 guests and up to nine crewmembers. Inspired by modern lifestyles, this design aims to create a harmonious flow between exterior and interior space.

In a statement, the studio added, “The Mania concept targets sporty, yet classy owners who have a dynamic way of living; they like to organise parties on board and entertain family and friends, but they also want to be able to reach the coastline quickly and have a glimpse of dry land.”

Key features on board Mania include a drive-in garage, with space for two tenders and a pair of Jet Skis, and a superyacht beach club, which can be converted into a salt water swimming pool.

Meanwhile, the private owner’s deck would feature a fold-out superyacht terrace, bar area, balcony and Jacuzzi. The VIP cabin also gets its own folding terrace, while the foredeck boasts a second superyacht spa pool.

Power would come from a pair of 1,056hp MTU engines for a top speed of 20 knots, with comfortable cruising at 12 knots. Riding on a fast displacement hull, Mania would be built from steel and aluminium.

Based in London, Squared MK was founded in 2015 and has created a range of concepts from 16 metres to 45 metres.