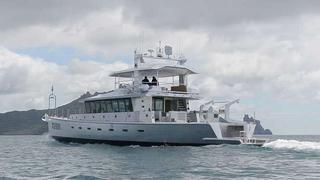 Built by Circa Marine in New Zealand, the 110ft boat is the latest in the ground-breaking FPB series and is designed to be the biggest FPB a couple can handle easily themselves. Writing in his blog, Dashew reports after day two of the sea trials, describing the shot below, “You are looking at what drives the FPB team, what our client and we have been waiting to see after two and a half years of intense effort. A lovely clean flow release off the stern with minimal magnitude, indicating a highly efficient cruising machine (this at 13.1 knots GPS averaged in two directions). A wicked wake indeed.”

The boat is propelled by twin 235hp John Deere 6068 SFM 50 engines. Predicted range is 5000 miles at least at 11.7 knots. The next stage of the sea trials is being kept confidential so that Dashew’s team can digest the data collected. He says, “Yachting is so full of illusory claims that we want absolute clarity and proof when we let the world at large know just how wicked this FPB 97 really is.” The veteran sailor and designer is running a competition for followers to guess the ultimate performance of the boat, but the winner won’t be announced for some time.

During the initial sea trials, the 20 high output solar panels on the roof of the pilot house were also tested and the results show they are capable of delivering more than 6000 watts of power. Dashew said the batteries were being topped up without difficulty. Meanwhile the boat’s passive vent system – large inlets in the forward side of the deck coaming and under the roof overhang – were doing their job of keeping the interior cool, Dashew said.

The Wicked FPB 97 is designed with a low carbon footprint and will be generator-free at anchor. It has a draft of just 5ft and the ability to dry out, with what Dashew says is the toughest structure ever offered on a production boat, with minimum maintenance required from the owners. Given the passage-making nature of the FPB series, it also has a self-righting capability in heavy weather if the worst happens. The design, however, means that the boat, if caught by a wave on the beam, should slide sideways down it, rather than being turned over.

Belying its Spartan looks, the boat has attractive living spaces inside and Dashew specified that extreme comfort in and out of port should be a feature of the boat while not forgetting safety and practicality. Consequently the FPB 97 features a Great Room where you can live while running the vessel, a Matrix Deck which is a combination of penthouse and flying bridge, and an owners’ suite on the Accommodations Deck that is full beam and 7.7m long. The three interior decks are all positioned well aft to avoid the worst of the motion in any kind of seaway. Dashew introduced the concept of a new FPB 97 ocean cruising yacht in 2012.

Dashew says the FPB 97 represents the apogee of the FPB series, “the most comfortable, secure, and efficient yacht that has ever been created for long distance voyaging”.