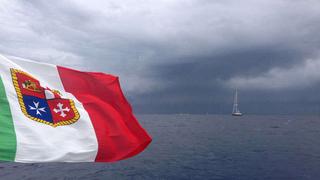 As the aftermath of Day One’s inter-yacht cocktail competition gradually wore off, the fleet of Perini Navi yachts in Porto Cervo began to get ready for Day Two of racing. But while the owners, their guests and the crews were getting ready to slip moorings, an ominous storm cloud rolled over the Yacht Club Costa Smeralda docks and a few spits of rain gave a hint of what was about to come.

Shortly after, as the yachts were beginning to leave, a mighty squall hit with torrential rain and 40-knot blasts. While it was quick to pass, the wind died behind it leaving the fleet drifting near the start line to a postponement.

The wind gradually built and by lunchtime there was great promise of some cracking racing but it wasn’t to be. A second storm cell charged in from the southeast, and with further cells behind it, shortly before two o’clock the race committee decided the safest option was to abandon racing for the day.

As the fleet headed back into Porto Cervo, disappointment quickly gave way to smiles as the drinks were brought out and the festival atmosphere of this family-feel event crept along the dock.

The forecast for Saturday looks like more of the same, with thunderstorms and a predicted wind of 10 to 15 knots from the east. Hopefully there’ll be enough of a gap between cells to get a race in!