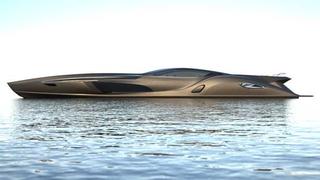 Strand Craft have chosen Ned Ship Group in Turkey as the preferred shipyard for its 50 metre and 38 metre planing yachts, which are inspired by automotive designs.

The low, sports car-like profiles of the SC122 and SC166 were designed for Strand Craft by Eduard Gray, who is famous for his super-sleek supercars.

‘With the 122 they gave me a fairly free hand to design, and so I started sketching from my automotive background,’ says Gray, principle of Eduard Gray Design. ‘I just went with what I think looks good – I wanted this thing, when it comes into a harbour, to turn heads.’

The car theme was pushed even further with the subsequent SC166, which features red leather interiors, plus lots of chrome and brushed metal (whereas the SC122 has an art deco style interior).

But these yachts were not just designed to look like sports cars, they were designed to perform like them. Strand Craft needed a to find a yard that was able to deliver the speed promised in the yacht’s svelte lines.

Lightness is not the only requirement that Ned Ship have been tasked with making a reality.

‘I was also designing a car at the same time, so we said, ‘why don’t we put the car on the boat?’ says Gray.

Indeed, both boats come with optional supercars, to be stored in a stern garage. This is just one of a series of unusual features in these yachts, which are intended to offer both fun at anchor and speed underway thanks to convertible designs.

‘When the boats are running everything is closed. You have only some sunbeds behind the pilothouse, and everybody else is inside – because we’re talking about a fast, high-performance boat,’ says Egon Faiss, Marketing Director of Ned Ship Group.

‘When you’re at anchor you can open the bow section and the aft section and convert these sections into a really open space with a spa pool, sun beds – a big beach club.’

The internal design also allows luxury within the constraints of a boat designed for speed – and which consequently has only two levels.

‘Everything is stretched on the main floor. The saloon is combined with the galley and the space is huge, full-beam. As you go forward through the saloon you pass a nice bar, a galley and you end up in the private area of the living rooms, bathrooms and the beds,’ says Faiss.

The SC122 features four double cabins with en suites and its three MTU 16V4000 M93 engines will offer a top speed of 50 knots, or higher.

Strand Craft are in talks about the 166 with four clients, one of whom is also interested in the 122.