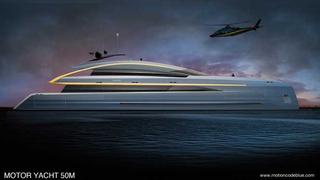 An Austrian yacht design studio called motion code: blue has come up with a concept for a 50 metre motor yacht which is aimed at a modern, design-conscious client who wants to stand out from the crowd.

Designers Christian Gumpold and Christopher Gloning have steered away from the traditional 'wedding cake' style, opting instead for a sporty, automotive-inspired design that combines straight lines with pronounced curves. An innovative design element called the 'C-bracket' was introduced to visually incorporate and integrate the yacht's four decks without the stacking effect. This is a thin, yellow element (see above) that starts on the fore deck and runs aft for an elongating visual effect, and then curves back over the upper deck.

'We wanted to make sure the MY 50M didn’t have the usual large yacht appearance of multiple decks stacked on top of each other. We wanted something which looks more coherent and streamlined,' says Gumpold. 'The C-bracket combines the upper deck and the flybridge deck optically and since the element is very “thin” but long, the yacht itself appears much longer than it is.'

When it comes to the stern the designers have taken into account the importance of the rear view, which is the most visible part of the yacht when it is berthed stern-to in marinas. Appearing bigger and wider than your neighbours even when your yachts are the same size is often an important consideration, and the designers are working on a 10.5-11.5 metre beam to create that powerful impression. A large beach club is also being worked up on the design.

A lot of thought has gone into the design of the stem too. Although the yacht has been drawn with an axe bow, the designers are aware that not every owner will want such a progressive wave-piercing stem, and so have come up with a variety of options ranging from a more traditional reverse sheer to a vertical, all of which fit with the decks and design of the yacht without affecting the appearance of the superstructure.

One of the features of the interior, which accommodates 12 guests, is the owner's 'loft', located on the upper deck. Larger and wider than typical main deck owner's suites, it opens out to a large private aft deck, and also has side doors with fold-out balconies, creating a vast inside-outside beach house-style area with spectacular views. The bed is positioned in the middle of the room on a podium, and while the concept is largely open plan, foldable panels and sliding doors can be used to demarcate different zones such as bathing, sleeping or working. The centrepiece is the spa pool set just within the sliding glass doors of the loft area on axis with the bed. When not in use, it can be covered with a glass plate that is strong enough to sit on.

The remaining 10 guests will be accommodated in four VIPs, two on the main deck with their own fold-out balconies, and two on the lower deck. Crew quarters are in the bow on the lower deck. Guest deck areas include the foredeck where a swimming pool is situated, and a flybridge, which has its own spa pool. Both areas have the potential for a heli pad.

Expect to see more as the design is developed in coming months.