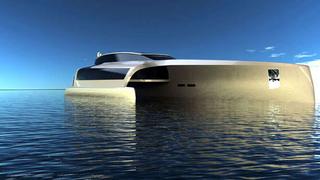 The Sunreef 210 Power Trimaran, unveiled in September 2013, represents the yacht builder's trend towards ever-growing superyachts. Last summer, it announced a new order for its Sunreef 90 Power and the sizeable Ultimate 165 sailing catamaran. Sunreef's CEO Franci Lapp encouraged his team, led by chief concept designer Robert Błażejak, to stretch the envelope ever-further, with this 64m power trimaran concept. Lapp has referred to the project as, 'Adastra on steroids.'

The ultra-modern 210 trimaran yacht was designed for a potential client. The innovative yacht will offer more than 950 square metres of living space within her nearly 22m beam. She will be operated by 12 crew members and comfortably accommodate up to 12 guests. Upon build, she would be the largest yacht of her kind on the market.

Constructed in advanced composites, the Sunreef Trimaran 210 will be powered by four MTU 12V 2000 M84 engines at 1,635hp each, propelling her to a top speed of 30 knots and a cruising speed of 20 knots with a predicted range of 5,000 nautical miles.