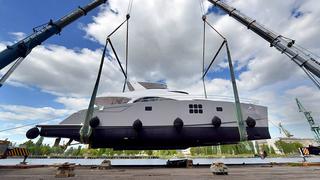 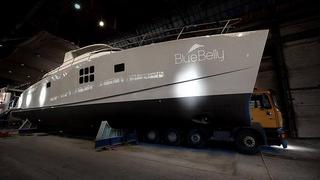 Blue Belly, which is will be heading for the Mediterranean after technical tests and sea trials, is the latest in the 70 Power line, created by Laurent Bourgnon and introduced in 2008.

The 21.3m catamaran has been given a unique specification for an individual client, which saw designers open the living area on the main deck and, as a result, forgo the interior navigation station in the saloon. This adaptation has created a large amount of living space in the lounge and dining areas.

There is direct access from the saloon to the master suite, which is located at the front of the yacht. Following her predecessor 70 Sunreef Power 1 Life, launched in 2014, Blue Belly`s master cabin features panoramic views and is equipped with a spectacular glass panel separating the bathrooms from the sleeping area. Blue Belly is finished with understated blue, white and deep grey upholstery.

Crew cabins are located in the forepeaks. The layouts of the aft cockpit on the wet deck and the flybridge on the upper deck were created for the constant pleasure cruising on such a craft should bring. There are top-quality mattresses, cushions, grill and dining tables with fixed heights.

As with the 70 Sunreef Power 1 Life, Blue Belly is equipped with a hydraulic platform aft. The lowering function ensures direct and easy launching of a jet ski, for example. The platform can also be used for recreational purposes and can accommodate sun beds.

Blue Belly has extremely low fuel consumption and is the leading powercat when it comes to longer ocean cruises. She is held in high regard by those who appreciate modern design combined with performance and a luxury finish.

The launch of Blue Belly has capped a busy few months for Sunreef that has, amongst other things, seen the boatbuilder nominated for awards for its sailing yacht, the Sunreef 74.