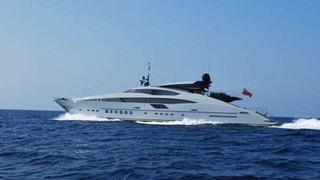 Launched in 2007, Skyfall II is the first hull in US shipyard Palmer Johnson's Supersport 150 series and was previously known as O'Khalila. Sunrise Yachts Refit Division performed an extensive seven-month refit on the Lloyd's and MCA classed all-aluminium superyacht.

The raised pilot house superyacht has an revamped exterior, which now features new teak decking, composite deck furniture, an integrated Jacuzzi, barbecue and relocated wing stations. She has also been completely repainted in a light grey paint, a distinctive change from her former metallic gold colour.

Skyfall II is listed for sale by Peter Thompson at Worth Avenue Yachts. Available to view at the upcoming Monaco Yacht Show, she is asking €13 million.