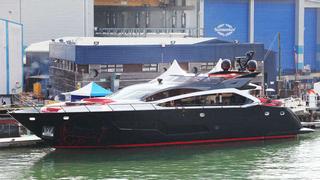 The 29.8m sports yacht boasts a bold black-and-red colour scheme and a pirate theme, including a red pirate-flag skull decal on her black hull. The yacht has been delivered to her owner, who hosted a 'build party' to thank the build and design teams who have brought Black Legend to life over the last 12 months of her build at the Sunseeker shipyard in Poole, UK. Some 80 members of the Black Legend build team were in attendance.

Superyacht Black Legend is the first Sunseeker 101 Sport Yacht to be launched. According to Sunseeker's superyacht sales manager James Hall, she is the, 'natural successor to the legendary Sunseeker 108 Predator.'

The standard layout for the Sunseeker 101 Sport Yacht will provide accommodations in four lower deck guest cabins with en suite bathrooms, including an amidships full beam master suite and a forward VIP, and accommodations for up to four crew members. The guest suites are flooded with natural light thanks to huge windows.

Various engine options are available for the Sunseeker 101 Sport Yacht series, the largest of which will propel her to a top speed of 31 knots and a cruising speed of 24 knots. The second hull in the Sunseeker 101 lineup has already been sold, build is well underway and its launch will follow shortly.