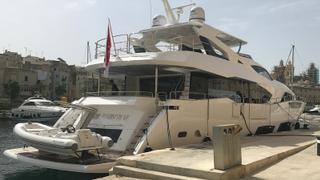 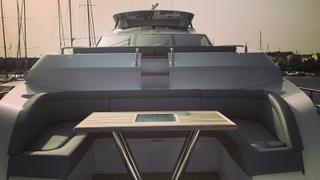 The 28.96 metre Sunseeker motor yacht Victoria Elizabeth VI has been delivered to her owner in Croatia.

Built by the British yard as part of the Sunseeker 95 series, Victoria Elizabeth VI features the five-cabin layout, giving accommodation for up to ten guests.

James Lumley of Sunseeker Southampton, who carried out several post-factory upgrades, describes the tight timeframe of her delivery as “quite a challenge” but adds: “We are really happy with the end result, in particular the custom GRP cover for the forward twin anchor and the shaped acrylic panels added to the flybridge railings.”

The handover took place in Malta last month, before Victoria Elizabeth VI cruised on to her final destination of Croatia. Key features include a commercial-spec galley, tender storage space on the large swim platform, and a full-beam owner’s cabin on the main deck that boasts a split-level en-suite and full-height panoramic windows.

Power comes from a pair of 1,950hp MTU 2000 series diesel engines that allow for a top speed of 27 knots. When trimmed back to her cruising speed of 12 knots, Victoria Elizabeth VI boasts a maximum range in excess of 1,500 nautical miles.

Other superyacht projects currently under development at the British yard include the seventh and eighth hulls in the 40.05 metre Sunseeker 131 series, which are both due to be delivered before the end of the year.