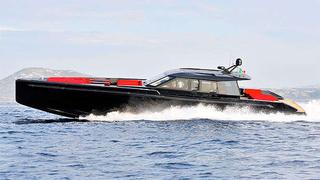 We revealed her design in Boat International magazine in 2011, and now she becomes a reality. Maori Yacht has launched its first Maori 78, christened Blackmail.

The Maori 78 becomes the new flagship series of the Italian yard. This 24m high-tech luxury supertender (large enough to be a yacht in her own right) has naval architecture, exterior design and interior styling by Nauta Design.

Entirely customisable, she's available with an enclosed cockpit and as an open version. The first hull's owners have opted for the enclosed cockpit. And Blackmail also accommodates four guests in a midship full-beam master and a double cabin forward, plus a crew area with a separate access.

Designed for high performance, Blackmail is powered by twin 1,800hp MAN engines coupled to Arneson surface propellers. She will make her official debut at the upcoming Monaco Yacht Show in September.